If you cast your mind back a few weeks, you'll remember that we won an award in December.

We were thrilled to be voted promotional merchandise Distributor of the Year, with the accolade being voted for by members of the industry. 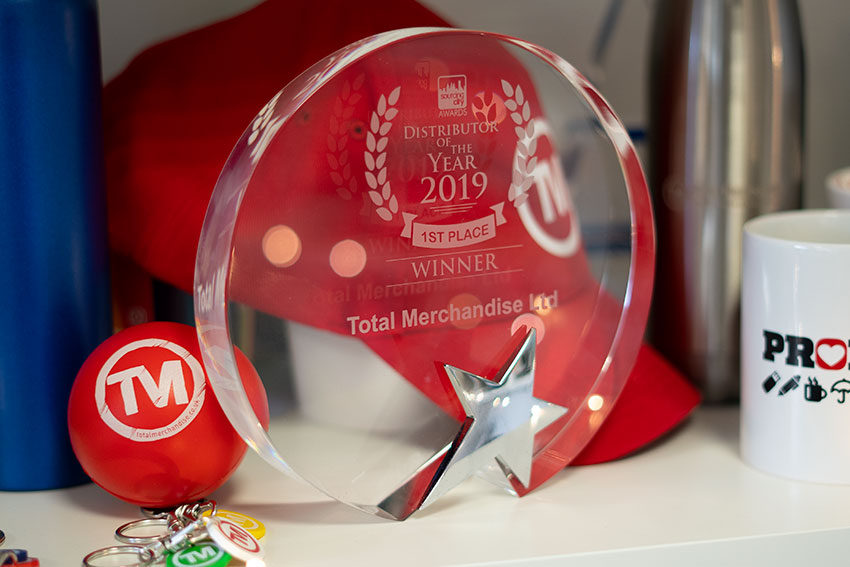 Fast-forward to now and we're delighted to have received our sparkling trophy from award organisers Sourcing City, as well as a rather smart certificate.

Speaking about Total Merchandise winning the award, co-founder David explains: "Winning this award means everything to us. It shows the relationships that our experienced and friendly staff have with our trusted and hardworking suppliers pays off, with top-class customer service the ultimate result".

The award is testament to the reputation for excellence and professionalism that the TM team prides itself on delivering in every single interaction, whether with a supplier or a customer.

Co-founder Michelle says: "It's fantastic for us to win this award, and we could not have done so without the help of our staff and suppliers. A massive 'thank you' to everyone involved and congratulations to the other winners and companies that were shortlisted."

And it doesn't end there - we've also been shortlisted in the BPMA's Distributor of the Year awards!

The winners are announced next month, so hopefully we'll have some more good news to bring you in February. Watch this space...

We've got some big news - massive news, in fact - Total Merchandise has just won yet another award! The TM team are over the moon to say that we have been...

TM Celebrates it's 17th Birthday - Happy Birthday to Us!

We've got some big news to share: it's our birthday! Today (3 September 2020) marks 17 years since Jason O'Connor, David Stoddart and Michelle Rae Sto...