Augmented reality: the concept of taking elements of a virtual world into the real world to enhance the things we see, feel and hear. Unlike its sister, virtual reality which throws you into a completely virtual environment augmented reality (AR) uses your existing real-world and overlays virtual information on top of it. We’ve put together some of the most important things you need to know about AR and how you could benefit from using AR in your marketing. 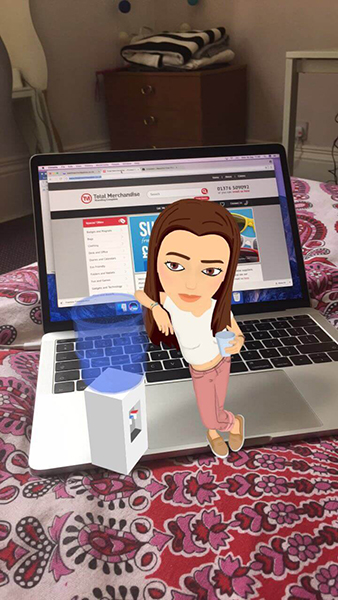 - Pokémon Go
One of the most viral uses of AR was with Pokémon Go - with over 100 million downloads in its first month, and reportedly earning $10 million per day at the height go its success, it was clear that the AR in Pokémon Go was a huge success.

- Google Translate
No, we’re not joking, Google Translate can now be used to annotate foreign text using the camera on your phone. A really useful tool for on-the-go translating.

- Modiface
Ever wanted to try on a certain lipstick or item of clothing but don’t have time? AR now provides a way for clothing, makeup and accessory companies to show potential customers what it would be like to use or wear their products. Modiface has AR mirrors set up in Sephora which allows users to virtually try on lipsticks and other makeup products without actually having to apply them - perfect for people who don’t want to be wiping their makeup off and applying a new product over again.

The title of the King of AR in the social media world has to go to Snapchat - the picture sending app which self destructs your messages after a few seconds. It’s pretty much unheard of that someone hasn’t seen a picture of a tween sporting the dog ears, or one of Snapchat’s other novelty camera filters which overlay the image of the person in real time. In fact, Snapchat’s AR hotdog went rather viral - it is a fully formed hotdog inside your Snapchat camera which people can move and film as if it were really there. John Baker, chief marketing officer at Miriam Agency said…

“There’s all this attention and excitement over what’s really very lightweight AR… And Snapchat can rightfully claim that flag for popularising the filters and all this innovation.”

Snapchat has hit advertising goals with its popular filters, where they charge hundreds of thousands of dollars for one-day lenses to promote certain brands.

Have you ever had contact with AR? According to a Deloitte survey, 88% of mid-market companies are already using some form of VR or AR as part of their business. Therefore, your brand could always benefit from experimenting with these augmented apps to really get ahead and stay on trend.

Fact: the British weather consists heavily of rain. Love it or hate it, the UK has an average of 156.2 days of rainfall every single year, so we have to be prepared for those su...