Regular and long term Total Merchandise friends and followers will recall, that we made our first live video broadcast on Twitter using their Periscope platform, in the summer of 2015. This was quite exciting because Periscope hadn't long been launched and we were the first promotional goods company in the UK to use the platform for business. We also couldn't be sure that it'd all go to plan, after we'd given our 20,000+ social media followers the date and time of the broadcast. Thankfully, it went well and the SMArties awards where again, a success! 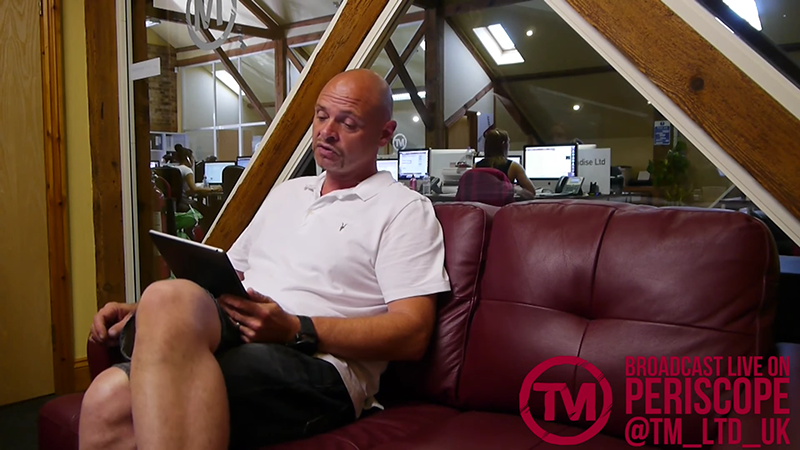 With the vast majority of the working population now owning a Smartphone, it is no surprise that live broadcast platforms like Periscope exist. They are catering for a need and it's a natural progression from posting up to the minute 'static' updates on social media platforms like Facebook and Twitter.

Of course, live broadcasts, or 'streaming' isn't really a new invention...some early entrants were in the market as far back as 2007. The problem has been the technology that allows smartphones in particular stream across a powerful enough signal.

And there are the lesser known (perhaps) alternatives to Periscope. We are of course referring to Google 'hangouts' and 'Meerkat'. It's long been rumoured that Meerkat may one day be acquired by Facebook, but as far as we know, this is literally still just that - a rumour. Meerkat though is particularly user friendly, because it allows both Twitter and Facebooks accounts to be linked to a live stream.

Facebook aren't missing out though. They now have the 'livestream app allowing live streaming straight onto their pages. More so, Facebook are actually releasing an 'API' allowing coders and developers to find inventive ways to use their streaming service...including the use of a particular format (DJI) of aerial drones, which was demonstrated by Facebook chief, Mark Zuckerburg on stage in April 2016.

As social media now starts to morph into a slightly different form through the advent of new technology and better 4G and Wi-Fi connections, the sky is literally the limit in terms of what we can expect next. Music artists for example have already been using live streaming on stage to pack out cinemas hundreds, or thousands of miles away from the live event. So, this is already leading to a form of 'virtual gig'.

Small businesses can ride on the back of this latest technological wave as well. If you are already saying something on social media in the traditional sense, or if you hold open days or have a service or product that requires people to maybe visit (a garden centre? restaurant?), then live streaming could be an opportune and exciting marketing venture that needn't cost you a fortune...