We've got a rather different kind of post for you today: we're raising a proverbial glass to an iconic promotional product that's celebrating a milestone event.

2020 marks a very occasion for the classic Rubik's Cube: namely, the iconic and beloved novelty giveaway will be marking its 40th birthday.

Whether they offer a flashback to your childhood or are part of your upcoming marketing campaign, the Rubik's Cube is instantly identifiable. In fact, just see the word 'Rubik' and we bet the first thing that pops into your head is that rainbow-bright cube.

Why Rubik's Cubes Make Great Additions To Any Marketing Campaign

With the potential to distract and occupy busy minds, the advertising power of a Rubik's Cube isn't to be overlooked. After all, what other promotional product requires your customers to focus solely on your branding?

Whether you opt for a classic cube or a keyring equivalent, there are a variety of options available when it comes to incorporating a Rubik's Cube into your promotional giveaway plans.

(In fact, this website even suggests that solving a Rubik's Cube is much like successfully running a business, requiring a combination of patience and common sense.)

Total Merchandise is delighted to be able to offer businesses across the UK their own unique opportunity to align their brand with that of the iconic Cube. You might wish to have it printed with your logo and contact details, or you might decide to have it emblazoned with your latest campaign imagery - the choice is yours entirely.

Whether you opt for the simple practicality of the Rubik's Cube Mini Torch (shown above) or keep it straightforward with our 2 x 2 Rubik's Cube, which is printed in full colour with your artwork, we have the perfect option for your target customer... And your marketing budget!

P.S. For a thoroughly modern take on this childhood favourite, consider our Rubik's Charging Cable Sets, shown above.

A Brief History Of The Rubik's Cube

The Rubik's Cube was created by Ernő Rubik, a Hungarian inventor and architect who originally designed it as a means to explain 'three-dimensional problems' to his students.

In 1974, whilst a professor of architecture at the Budapest College of Applied Arts, Rubik created the first prototype of what would become the Rubik's Cube as we know and love it today. 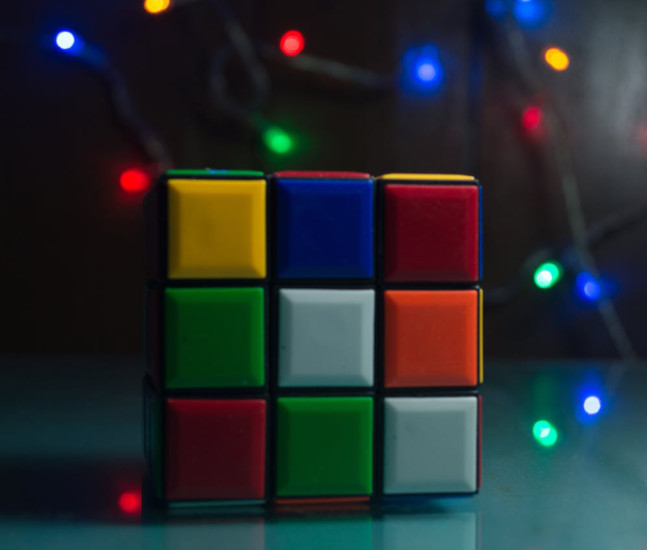 After debuting it to his students - and realising the frustrating and addictive predicament the puzzle presented - Rubik realised he was onto something special. Despite initially struggling to solve the Cube himself, Rubik eventually worked out the solution, to such an extent that he would later demonstrate how it could be solved in under a minute at trade shows around the globe.

(And that's positively leisurely compared to the speed-solvers around the globe who can solve the puzzle in 10 seconds or less.)

"If you are curious, you'll find the puzzles around you. If you are determined, you will solve them." - Ernő Rubik

Rubik applied for a patent for his 'Magic Cube' (the puzzle's original name) and the rest, as they say, is history. After signing a deal with Ideal Toy Company, it was renamed to Rubik's Cube in 1980 - hence the 40th anniversary of the brand in 2020. 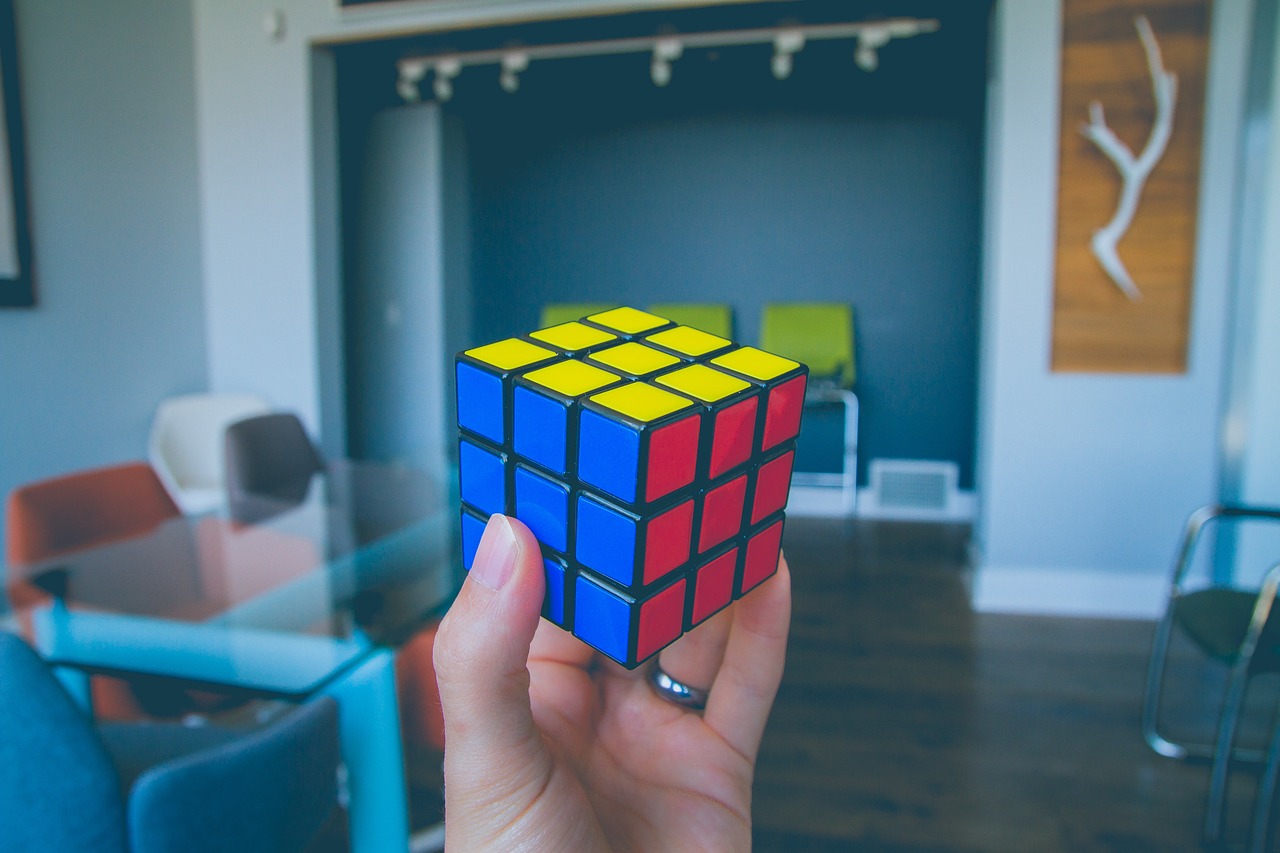 The popularity of the Rubik's Cube exploded in the 1980s, with 12-year-old Patrick Bossert even publishing a how-to guide, You Can Do The Cube, in 1981. The book became a New York Times best-seller, with over 750,000 copies sold.

In 1983, there was even a TV show created: Rubik, The Amazing Cube aired for a whole season in America and saw plucky Rubik escape the clutches of an evil wizard. (And naturally, many an adventure ensued along the way...)

Still from Rubik, The Amazing Cube

After a lapse in concentration in the '90s, interest in the Cube began to steadily rise again in the early 2000s. In fact, 2003 saw the return of the World Rubik's Games Championship for the first time since 1982; in turn, this led to the forming of the World Cube Association in 2004.

Video-sharing platforms helped to further accelerate the resurgence of the Cube's popularity, with users around the globe sharing and watching videos that detailed strategies for successfully completing the puzzle.

With its distinctive appearance, the Rubik's Cube has found itself the star of many pop-culture moments over the years. It had an appearance in the Spice Girls' Viva Forever music video, for example, and also helped Will Smith's character get the job of his dreams in The Pursuit Of Happyness. It even got a reference in Disney movie Wall-E.

With upwards of 350 million Rubik's Cubes having been sold around the world by 2014, it's safe to assume that this is a cult product with enduring popularity.

Some Mind-Blowing Trivia About The World's Favourite Cube

A Rubik's Cube features 26 equally-sized cubes. Each Cube comprises layers of equally-sized cubes that can be twisted into an astonishing 43,252,003,274,489,856,000 different combinations. If you were wondering, that number is 43 quintillion - a number so huge that chances are you weren't even aware that 'quintillion' was a concept.

According to estimates, less than 6% (5.8%, to be precise) of the world's population can successfully solve a Rubik's Cube. Could members of your customer base sit within that hallowed percentage? Might members of your workforce be able to crack the Cube in 60 seconds or less? There's only one way to find out...

From mailable promotional products to branded giveaways for showing gratitude to your team, Total Merchandise has all the branded items your business could need this spring/summer. Need help finding a specific item? Simply contact a member of our friendly and experienced Sales team on 01376 509092 or email info@totalmerchandise.co.uk!

As Product Team Manager for the past 15 years, Adam has built up an enviable reputation as one of the industry's most trusted authorities on promotional merchandise. As well as supplier relations, product sourcing and pricing, Adam is also responsible for ensuring our promotional merchandise is presented on the website in the most effective manner. His expertise makes him the go-to person in the company for spotting merchandise trends and finding the best branded products to meet customers' needs. When not at work, Adam enjoys travel, electronic music and all forms of cinema.

Connect with Adam Carter on LinkedIn

This Sunday (27th March 2022), people all over the country will be celebrating Mother's Day; the day focused on expressing respect, honour and love towards mothers or m...