If you've seen an animated image online, chances are you've seen a GIF. That stands for Graphics Interchange Format & was invented way back in 1987 - almost 30 years ago. So, How do you pronounce "GIF"? Many pronounce the word with a hard 'G', like in the word 'go', however, the creators of the format pronounce it 'Jif' - how confusing... In today's blog, we'll be talking about the use of GIFs in advertising as well as social posting.

Sadly, the real world hasn't got newspapers like those from the Harry Potter films. While it would be cool for the reader to see animated images on their paper, it's would also be a big step for the newspapers companies themselves, who could have moving images to catch the readers attention.

While it's unlikely that we'll see animated images on physical newspapers anytime soon (although with advancements in flexible displays you never know) we already have portable tablets and online newspapers which perform a similar task.

There's no doubt that movement grabs the attention of the audience, surely the moving album cover pictured right caught your attention? This begs the question, "Why isn't everyone using movement, video and animation in their visual marketing?"

Part of the problem is cost. If a professional looking, still advert is expensive to create, then a moving image is even more pricey! What's more, a still advert has many more applications than a video ad. A still image can be put online, in a magazine or printed just about anywhere (including promotional merchandise), while a video can be played on TV, on the internet or maybe a video billboard... It's often more logical to invest in grabbing the viewers attention with colour rather than movement.

The other issue could be that visual formats like the GIF can be seen as annoying/spammy, see the Geocities page below. Though the 1990s showcased some pretty tacky uses for GIFs, design has come a long way and most internet users are more aware of aesthetics in the 21st century. 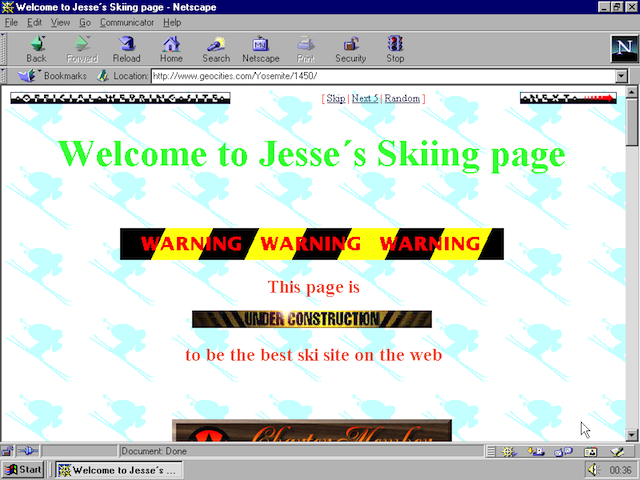 Of course many are using the format today, GIFs have become popular on internet blogs as well as popular news sites. At Total Merchandise, we hope to see more engaging moving images online in the future, but what about you? Let us know on our Facebook or Twitter!