You may remember Volkswagen's emissions scandal way back in 2015, also known as Emissiongate, or dieselgate... For those that missed that development in "environmentally friendly" cars here's the gist of it. Volkswagen released its new low emission diesel range. The testing figures were incredible, no one had seen numbers this low from a polluting diesel engine, VW sold these cars under the guise that they didn't release harmful chemicals/pollutants, making them "greener". Later the cars were tested in real-world conditions and it was found that VW had installed a bit of software that figured out when the car was being tested for pollution and reconfigured the engine to release a whole lot less nitrogen. The more accurate tests revealed that in everyday driving these cars released way over the legal amount of nitrogen. Volkswagen had not just broken emissions laws, they had lied to their customers, and are still suffering from that.

Volkswagen has been creating groundbreaking advertisements since the 1950s when they advertised the Beetle (then known as the Type 1) using simple black and white images on a white background - this was unheard of, with most advertisements featuring bright colours and busy spaces. 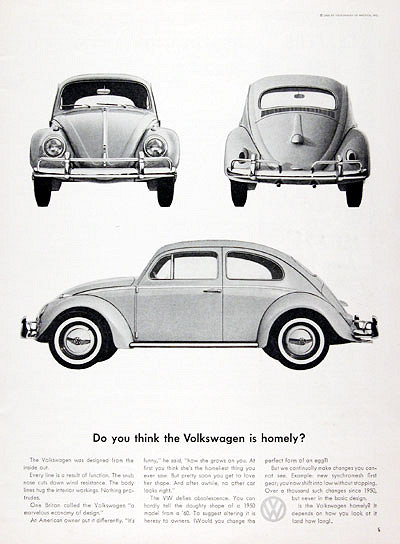 In this blog, we'll be looking at how VW has moulded its reputation after the PR disaster using advertising and tried to rekindle their trust.

When the news hit headlines VW was fast to act, pushing out full-page adverts in national newspapers saying simple phrases. Things along the lines of, "We've ruined the one thing we can't get back, your trust." These simple but heartfelt messages went some way to rebuild trust, but are still suffering today.

In the weeks after the news, VW installed a new CEO and stopped selling it's diesel lines, losing thousands in research before receiving harsh fines from regulating authorities. While VW would much rather forget all of this, they'll be the topic of news articles for years... and there's not much they can do about that! Have you forgiven Volkswagen for their 'errors', or are you staying away from their brand? We'd love to know, find us on Facebook & Twitter!