30 years ago today Back to the Future II hit cinemas and made some pretty ambitious predictions for the world on today's date of 21st October 2015. According to the movie, by now we're supposed to have flying cars, food hydrators, and robot petrol fillers, but it's obvious some of the predictions are completely off the mark. Some of them, however, we use on a daily basis, so we thought we'd have a look at which of the predictions actually came true, and which ones definitely haven't (yet).

Marty McFly uses a Hoverboard in the movie as an evolved version of a skateboard, and it looks a lot of fun. Sadly though, this doesn't seem to have been made into an actual marketable product quite yet, although the designs and technology for such a gadget are currently in development. Who knows, maybe in 10 years we'll be providing Total Merchandise Hoverboards to businesses! It would certainly be a great way to get around. This one definitely came true, with programmes such as Skype now an everyday staple in offices and homes throughout the world. In fact, our 2015 has surpassed the expectations of the movie and the power to make video calls is sitting in our pockets! There are so many other ways to do it too, be it through your iPad or your TV. So what's next? 3D video calling perhaps? Or holograms maybe? Time will tell!

In 2011, Nike released a limited edition replica of the famous self-tying trainers worn in the movie, but it did not feature the power laces. Since then there has been speculation and reports that Nike is working to reproduce a full working set of these, but unfortunately, it seems we will have to wait a bit longer for them. And even longer for self-tying shoes to become the norm! This was perhaps one of the more ambitious predictions from Back to the Future II, but not as ambitious as the next one... 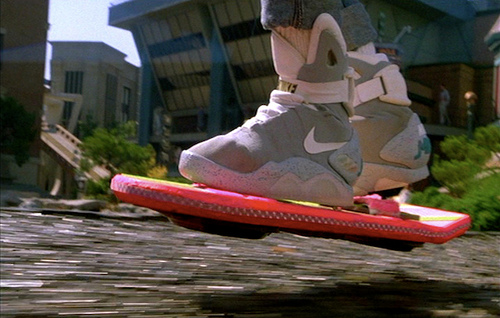 Marty McFly is approached by a man holding something that looks suspiciously like an Apple iPad in the movie. This is another gadget that has surpassed what was predicted 30 years ago and continues to develop now. With various different designs and uses, where would we be without our tablets to read with on holiday, or use while on the go? The question is, did the original idea come from Back to the Future II?...

Ah, the convenience that would come from such an invention as self-drying clothes! Caught in the rain? No problem, you'll be dry in 30 seconds. Alas, this has yet to be invented, but could potentially be possible in a few years time. There is already 'intelligent clothing' that detects changes in weather or displays your mood using sensors, so perhaps a jacket that goes from wet to dry on its own is a thing of the future! But maybe without the hand dryer-like effects?

We aren't able to gain access to our houses using fingerprint recognition yet, but we can use our fingerprints to access our mobile phones, suggesting that soon it might be the norm! It's a great way of ensuring your mobile is secure, and there's no reason why the technology can't be developed to secure other things. Another use of fingerprints in the movie is to pay for things, which hasn't happened yet either, but perhaps that's the future of today's contactless payment?

Fact: the British weather consists heavily of rain. Love it or hate it, the UK has an average of 156.2 days of rainfall every single year, so we have to be prepared for those su...